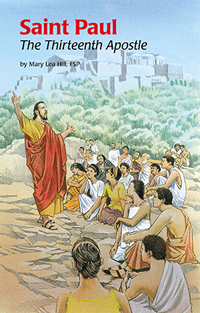 A persecutor of the early Christians, Saint Paul was forever changed along the way to Damascus when he met Christ. He traveled all over the world, preaching and writing the Good News, which led many people to Jesus. Although he was not one of the original twelve apostles, he became known as the “thirteenth apostle.” His story is foundational to Christianity, filling the greater part of the Acts of the Apostles, and his letters are commonly read at Mass on Sundays.