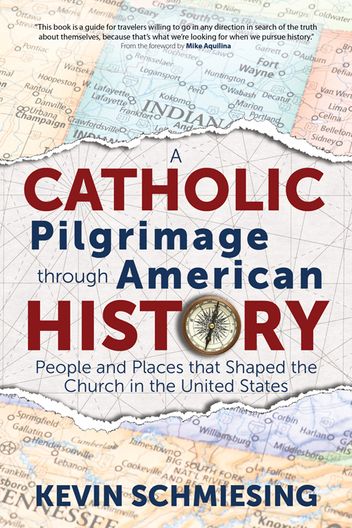 A Catholic Pilgrimage through American History

Historian Kevin Schmiesing takes you to more than two-dozen sites and events that symbolize and embody America’s rich and sometimes tumultuous Catholic past, including the Santa Fe Trail, Gettysburg, and the Bourbon Trail. You’ll also meet both famous and infamous Catholics—including Augustus Tolton, Dr. Samuel Mudd, and Frances Cabrini—who impacted our nation’s history.

The idea for A Catholic Pilgrimage through American History came from Schmiesing’s mother, he says. She turned every childhood vacation into a pilgrimage, purposely inserting religious sites into the family’s journey to places such as Niagara Falls, Washington, DC, or Myrtle Beach.

Catholics have been part of the American experiment since the beginning—in founding the colonies and expanding the west, building education and health care systems, abolishing slavery, fighting on the front lines, and advancing science, technology, and space exploration. Each of the twenty-seven sites on Schmiesing’s virtual itinerary—including, the Washington Monument, Wounded Knee Creek, the University of Notre Dame, and Mission San Diego de Alcalá—transports you to a significant time in US history and connects the dots to our Catholic heritage. You will meet notable Catholics such as John F. Kennedy, Black Elk, and Katharine Drexel, and learn more about their contributions to history.

You will explore the various and sometimes conflicting roles Catholics have played in key periods and events through the stories of shrines, memorials, and other historic places including: